You have four display types to choose from:
Black & White (No Color)
Heavy Bond Enclosure

Ready for Mantle or Shelf Display

Issue Requirements
You must submit the following:

You may apply for your Display Recognition using a...

(* Upon reception of required documentation)

Please complete and MAIL this APPLICATION FORM.
Don't forget to include an unaltered COPY of your DD-214, WD AGO 53-55 or other pre-arranged document(s). 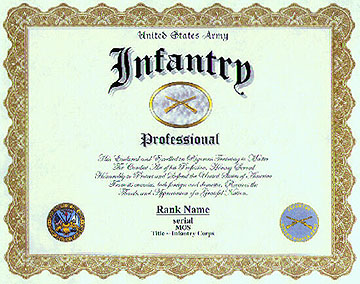 Crossed muskets were first introduced into the Army as the insignia of officers and enlisted men of the Infantry on 19 November 1875 (War Department General Order No. 96 dtd 19 Nov 1875) to take effect on or before 1 June 1876. Numerous attempts in the earlier years were made to keep the insignia current with the ever changing styles of rifles being introduced into the Army. However, in 1924 the branch insignia was standardized by the adoption of crossed muskets and the 1795 model Springfield Arsenal musket was adopted as the standard musket to be used. This was the first official United States shoulder arm, made in a government arsenal, with interchangeable parts, caliber .69, flint lock, smooth bore, muzzle loader. The standardized musket now in use was first suggested by Major General Charles S. Farnsworth, U.S. Army, while he was the first Chief of Infantry, in July 1921, and approved by General Pershing, Chief of Staff, in 1922. The device adopted in 1922 has been in continual use since 1924. There have been slight modifications in the size of the insignia over the years; however, the basic design has remained unchanged.

Branch Plaque: The plaque design has the branch insignia, letters and border in gold. The background is light blue.

Regimental Insignia: Personnel assigned to the Infantry branch affiliate with a specific regiment and wear the insignia of the affiliated regiment.

The Infantry has made two complete cycles between white and light blue. During the Revolutionary War, white facings were prescribed for the Infantry. White was the color used for Infantry until 1851 at which time light or saxony blue was prescribed for the pompon and for the trimming on Infantry horse furniture. In 1857, the color was prescribed as light or sky blue. In 1886, the linings of capes and trouser stripes were prescribed to be white. However, in 1902, the light blue was prescribed again. In 1917, the cape was still lined with light blue but the Infantry trouser stripes were of white as were the chevrons for enlisted men. The infantry color is light blue; however, infantry regimental flags and guidons have been National Flag blue since 1835. White is used as a secondary color on the guidons for letters, numbers, and insignia.

Birthday: 14 June 1775. The Infantry is the oldest branch in the Army. Ten companies of riflemen were authorized by the Continental Congress Resolve of 14 June 1775. However, the oldest Regular Army Infantry Regiment, the 3d Infantry, was constituted on 3 June 1784 as the First American Regiment.